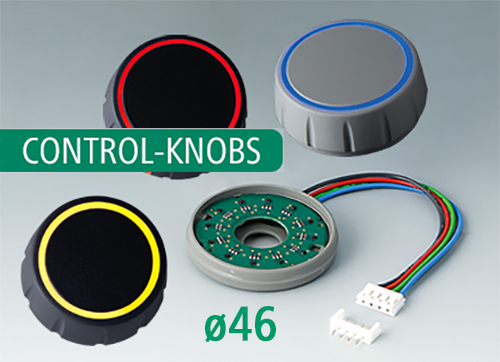 OKW's size ø46 mm CONTROL-KNOBS are now available with #LED illumination as a standard option - matching the existing option for the size ø36 models. For the 46 mm size a new circuit board (accessory) was developed, fitted with 12 LEDs (RBG backlight, without controller).

When specifying this option, the LED illumination kit and base (accessories) should be ordered with the CONTROL-KNOB. Ask our sales team for a sample kit for evaluation. 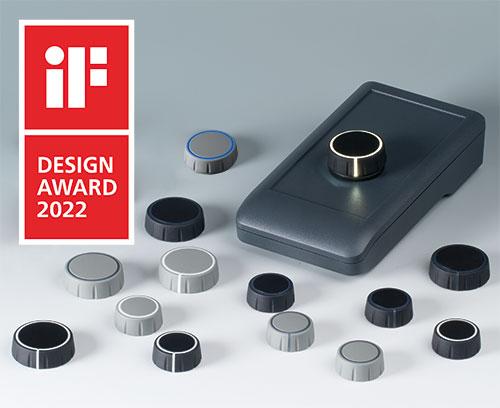 We are very pleased to announce that our CONTROL-KNOBS range of tuning knobs has received an iF DESIGN AWARD 2022. These now award-winning knobs offer a finely-tuned combination of functionality, aesthetics and ergonomics. Customers praise the innovative design and tactile soft-touch feel. This is the added value that our CONTROL-KNOBS offer. And, LED illumination is also available to really let your electronics equipment make a design statement!

The iF DESIGN AWARD is one of the most important design prizes in the world. For 65 years, designers and manufacturers have worked to win the internationally renowned iF label for design. Winning an iF DESIGN AWARD is a seal of quality for exceptional design and outstanding services. For consumers and users, it is a symbol they can trust. Over the last thirty years OKW has received 6 of these awards, view them here. 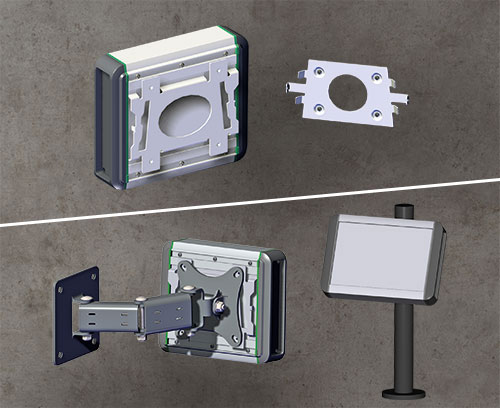 The VESA standard is used in many suspension arms and wall suspension systems to attach devices easily and securely. On request, and in conjunction with the SMART-TERMINAL enclosure, OKW can now offer a 2-part VESA adapter kit made of anodised sheet aluminium in accordance with the VESA 100x100 mm standard. With this VESA adapter SMART-TERMINAL enclosures can also be mounted directly on commercially available suspension arms and wall suspension systems with 100x100 mm mounting holes.

Installing the VESA adapter is quite simple: slide it sideways into the existing grooves on the rear side of the enclosure, then screw the plastic end covers and TPV seals - or the aluminium end plates - to the enclosure profile. The adapter can also be used to mount the unit on a wall (using the wall plate from the 2-part set). Cables can be fed through both the VESA adapter and the wall plate using the corresponding cutouts, thus allowing the unit to be connected at the rear.

The new kit further enhances the versatility of the SMART-TERMINAL enclosure in use, making it easy for the user to operate and read displays and controls.

Talk to our sales team if you would like to specify this adapter for your SMART-TERMINAL enclosures. 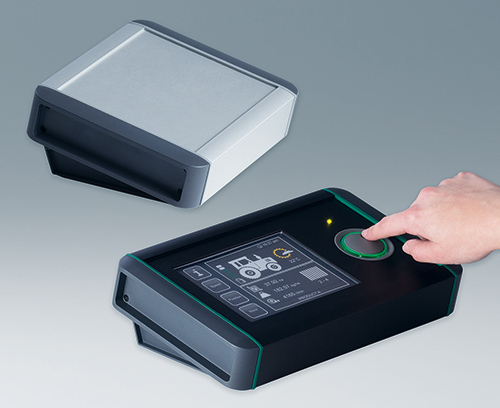 OKW has updated the canting kit for its elegant SMART-TERMINAL extruded aluminium enclosures – further enhancing their stability when used as a desktop housing.

OKW has subtly redesigned the canting kit (Product no. B3507030) used to incline SMART-TERMINAL at a 12° angle for more ergonomic viewing and operation. Each of the two triangular canting stands now features additional location elements – ensuring even greater stability during use. 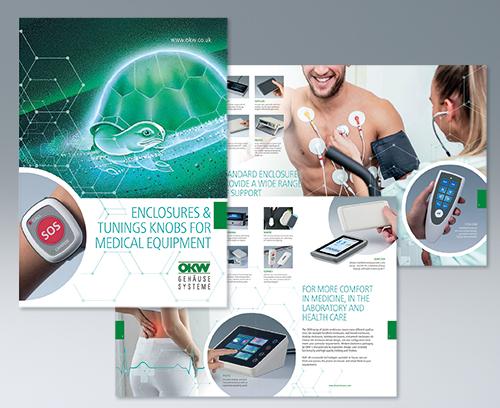 OKW's range of enclosures and tuning knobs are perfect for many different applications in the medical electronics field. For example handheld, wall and table-top mounted medical equipment in hospitals, dental surgeries and in the wellness industry. The enclosures can also be mounted to suspension arms, trollies, bed frames and hospital DIN rails (EN ISO 19054).