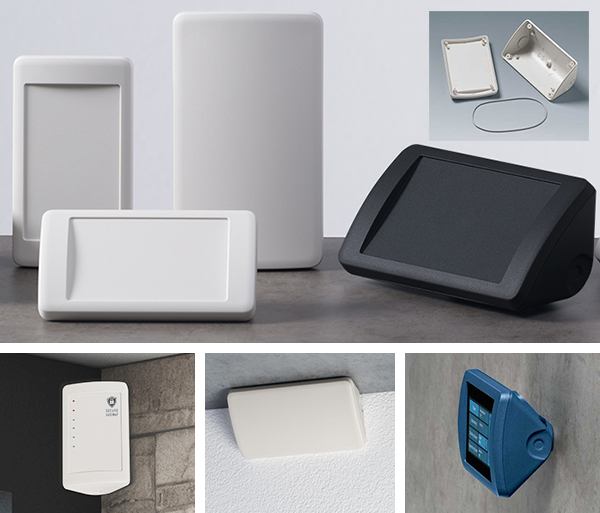 Q: Why now for SMART-CONTROL? What prompted OKW to launch its first corner enclosure?

A: We see a rapidly expanding market for sensor enclosures with the growth of the Internet of Things and the Industrial Internet of Things. This technology is hugely exciting and has the potential to transform our lives – both in the workplace and at home. SMART-CONTROL is the latest in a number of enclosures designed with IoT and IIoT very much as a priority. It’s perfect as a reader/receiver for use in conjunction with sensor tag enclosures such as MINITEC.

Q: What other key applications do you envisage for SMART-CONTROL?

A: Security monitoring is the obvious one – housing motion sensors at high level and with a wide angle of ‘vision’. But we’ll see a lot of these enclosures being specified for measurement and control engineering as well. Many will be installed in factories and technical facilities, even though you tend to associate these environments more with metal enclosures than plastic ones. SMART-CONTROL is tough because it’s moulded from a plastic blend that includes polycarbonate (ASA+PC-FR). Also, it’ll gain added protection from being installed in corners and at height. We also see the medical sector as another key market – that’s why SMART-CONTROL is assembled with tamperproof stainless steel Torx screws as standard; a key requirement for medical electronics.

Q: Is the importance of the medical market why SMART-CONTROL can double as a desktop enclosure?

A: The medical sector is a very important area for desktop SMART-CONTROL – and for OKW as a whole. Besides, making it suitable for tabletop use was just too good a design opportunity to miss. It also explains why SMART-CONTROL is available with a choice of top/front sections; we see the convex version being popular for wall-mounted monitoring applications and the recessed top/front for desktop electronics. But there’s nothing to stop you from wall mounting a recessed version for access control applications that require a membrane keypad. Also, at OKW we have a long history of creating enclosures that work well for applications that you wouldn’t expect at first glance: our CARRYTEC handheld enclosures can be mounted on suspension arms; ART-CASE can be attached to a Europlug – and our handheld BLOB case has been wall mounted to provide access control to a kindergarten because in that position it looks like a friendly, welcoming teddy bear!

Q: Was desktop use the reason for SMART-CONTROL’s enhanced ergonomics?

A: Yes – to a certain extent – but there’s more to it than that. We wanted SMART-CONTROL to have soft contours and rounded edges, even though in its wall mounted role it’ll be sitting high in a corner. Just because an enclosure isn’t going to be handled much, that’s no reason to skimp on ergonomics. At some point every enclosure will be handled – during installation, servicing or maintenance – so it must feel tactile; this inspires confidence in the quality of the design. Aesthetics are also vitally important: SMART-CONTROL must look good wherever it is used, whether in a smart factory or as part of a home automation system. Its rounded edges are – dare we say – cutting edge!

Q: SMART-CONTROL is moulded from ASA+PC-FR. Has ABS fallen out of favour?

A: Not at all. Many of our most popular enclosures are moulded from ABS. These are tried and tested designs that were ABS from day one. And it still remains a popular plastic for all the reasons that were true when these cases were first launched: ABS is strong, resistant to impact, scratches and heat – and it’s cost effective. But it’s no coincidence that our latest plastic enclosures (EASYTEC, SMART-CONTROL and PROTEC) are all moulded from ASA+PC-FR. ASA is such a great plastic; it’s strong, UV-stable and it looks and feels great – especially with the modern, high gloss finish we’ve used for BODY-CASE and STYLE-CASE. And there’s nothing to stop you from specifying an ABS-as-standard enclosure in ASA or ASA+PC-FR as a custom material.

Q: SMART-CONTROL has a specialised role but must also be discrete in design. How hard was it to balance these conflicting demands?

A: Discrete design is always vital for standard enclosures. No manufacturer wants to specify a standard case for their electronics and then see another product in the same housing. But SMART-CONTROL’s choice of top sections, its multiple mounting options and all the customisation options make it very easy to differentiate your product. Besides, we’ve had tougher challenges – such as BLOB, which is highly distinctive and yet can be adapted to suit so many different applications.

Q: What are the latest customisation options available for SMART-CONTROL?

A: SMART-CONTROL offers an optional IP55 protection rating. It can also be specified with all the usual customisation options – machining, lacquering, printing, decor foils, EMC shielding, assembly – but we’ve just added laser marking as a new service. It offers all the advantages of digital printing but it’s even more robust. Laser marking turns the plastic grey at the point of contact so it’s completely smudge-proof. Options include consecutive numbering – and the quality is extremely fine – so it’s ideal for applications that involve machine-readable QR codes or barcodes.